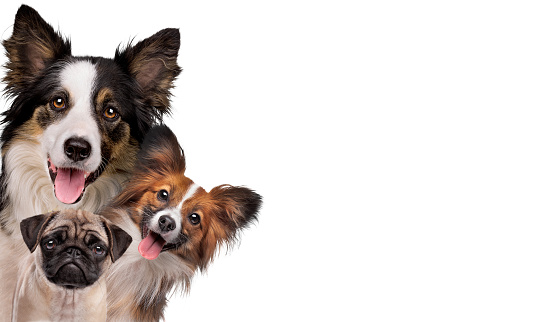 Dogs, for centuries, have been more than just man’s best friend; they have also been one of our most stalwart defenders. After all, many dog types were bred over millennia to protect people and livestock. So, the fact that some dog breeds are more protective than others shouldn’t shock anyone. Being a guardian angel is part of the job for some dogs. Still, what are the most protective dog breeds?

Potential dog owners that want a dog that can help protect their family should consider breeds such as the Akita, Bullmastiff, Boxer, Cane Corso, Doberman, Great Dane, Rottweiler, along with other options. What dog is best for your situation will depend on many factors, such as living space and the family’s activity level.

So, without further ado, let’s dig into the details of 15 of the best dogs for protection that any potential puppy parent should consider.

In their native Japan, the Akita is revered as a natural guardian and protector of the family. An Akita’s cute looks often belie their potential physicality. At 130 pounds for a male, an angry Akita is nothing to sneeze at. However, these dogs are also extremely loyal to their masters and have even stayed with them after death, as shown in the case of Nicole Brown Simpson.

This member of the Terrier group is much larger than some of its doggy cousins. While not the tallest dog, typically maxing out at 19 inches, these dogs can still weigh a hefty 70 pounds. As a result, the American Staffordshire Terrier does best when introduced to a family at a young age.

Lastly, this breed can be remarkably long-lived, with some lasting up to 16 years old.

Also known as a Belgian Sheepdogs, Belgian Shepherds are one of the best medium-sized guard dogs for families. While not the largest dogs on the planet (the heaviest Belgian Shepherds will weigh around 65 pounds), this breed is incredibly easy to train. This is due to their high intelligence, natural prey drive, and eagerness to please. These dogs can even do well with families with small children if adequately trained.

This big British brut is a powerful and reliable guardian that was initially bred by mixing an Old English Bulldog with the more massive English Mastiff for the purpose of hunting poachers. The resulting breed is a stocky yet athletic animal that is loyal and loving in addition to the security presence that it provides.

Boxers are not the largest or most aggressive breed that you’ll find on this list, but that doesn’t make them any less suited an animal for protection. Boxers are incredibly brilliant, active, and playful. Boxers are a great family dog. They are bonded with children, especially as they will be most protective of children. They also excel at canine sports, such as agility training. They will require supervision with other animals.

When it comes to protective dog breeds, you can’t get much better than a Cane Corso. These dogs originated during the time of the Romans, and their name means “bodyguard” in Latin. Owners ready for a full-time defender should seriously consider the Cane Corso.

Don’t expect a fantastic family dog if they join your clan later in life. Cane Corsos need significant socialization early on in life to properly connect with their family members. So, to ensure that your family has as good of a bond as possible, it’s essential to keep an eye out for Cane Corso puppies for sale if you’re interested in the breed. Getting a Cane Corso puppy is the easiest way to start forming the desired family relationship early.

A Dobermann, or Dobermann Pincher, is one of the most well-respected breeds of guard dog around as well as a good family dog. The breed has long been noted for its fearlessness in the face of danger and its attentiveness to potential intrusions. Dobermanns will require plenty of activity to stay physically and mentally fit. One note is that a Dobermann may have difficulty adjusting to new dogs joining the family.

Surprisingly few (given the breed’s name), German Shepherds originated from 19th century Germany, originally used as sheep herders. In contemporary times, these pups are recognized as athletic and capable protectors and gentle and loving canine companions. These dogs are incredibly active, and a routine is recommended to help keep them fit and happy. Supervision is always recommended for families with German Shepherds with smaller children or other pets.

The Giant Schnauzer offers an aristocratic air thanks to its meticulously maintained wiry coat. However, these dogs can be short with children and other animals, so proper training before introductions is always highly recommended. Luckily, the Giant Schnauzer is a very trainable breed. This is thanks in large part to its intelligence and need for constant validation and companionship.

Look at a Great Dane; any potential ne’er-do-wells will probably be scared off. And with males weighing in at 175 pounds, it is easy to see why—these are some seriously hefty pups. However, despite their size, Great Danes are very affectionate with family and can even get along with other dogs and small children reasonably well (with supervision, of course).

The second “Great” breed on this list is the Great Pyrenees. And while these dogs may seem majestic with their fluffy mounds of white-golden hair, they also are very adept protectors. This breed was initially known to protect livestock from wolf attacks with supreme dependability. The breed is calm, gentle, and affectionate but will need to be socialized as a puppy if the owner desires their Great Pyrenees to be a family dog.

Ignore the fact that their hairstyle doesn’t scream “faithful protector” the Komondor is a wonderful family dog that is much more devoted, brave, and independent than one might think. Komondors are easily trained but do best with older children in the household. Unfortunately, the breed doesn’t typically get along with other animals well.

The Rhodesian Ridgeback can trace its origins back to South Africa and its use by the Khoikhoi as a hunting and guard dog. These dogs are highly sensitive to intrusions in their family’s space and can be strong-willed if not properly motivated. One way to ensure that the breed maintains concentration during training is to utilize the Rhodesian Ridgeback’s naturally high prey drive.

Known in their native Germany as Rottweiler Metzgerhund, these pups were traditionally used to help butchers pull carts of meat to market. The working dog has many personality traits that owners look for in a guardian dog, including being alert, calm, loyal, and independent. While not the best guard dog for those with small children or other pets, a lot can be done to make Rottweilers more companionable if they are trained from an early age.

Shiba Inu may not be the first breed that comes to mind when looking for a guard dog, but these pups are surprisingly well-suited for protection. The breed is known for its intelligence, loyalty, and alertness. While technically a non-sporting breed, these dogs were used for hunting in their native Japan. While easily trained, these dogs cannot be trusted off-leash in an open area.

Also Read: Tips to improve Daily Life for a Loved one with Alzheimer’s

9 Ways Adults Can Prepare for Weekend Athletics with Their Kids

Ordering Pet Food From E-commerce Sites: Here Are Some Mistakes To Avoid